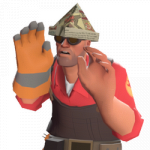 The 6th Sense is an illiterate retard who is usually seen as any of the nine classes wearing a Manniversary Paper Hat, even though he doesn't actually have one in-game.

The 6th Sense's behavior can be very unpredictable. At one point in time, he can be acting very friendly towards everyone around him, in about a minute and half later he was found rolling around in the puddles of blood created by his mutilated friends.

The 6th Sense is a very powerful fighter and can brutally murder even high-tier Freaks with ease. He was once exiled from Badlands for genociding a group of rather peaceful BLU Vagineers.

None. Once enraged, The 6th Sense is an unstoppable killing machine.

Retrieved from "https://tf2freakshow.fandom.com/wiki/User:The_6th_Sense?oldid=24479"
Community content is available under CC-BY-SA unless otherwise noted.