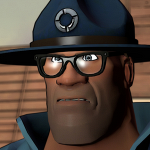 I'm Kugawattan, GModder and founder of the TF2 Freakshow Wiki.

Special thanks to GigaCakeMmmKay for getting this project started with me, SarisKhan, OluapPlayer, ShermanZAtank, Stylx and Xho for their companionship, friendliness and willingness to help develop this wiki to its current state, and Jillian189 and TheSquishyPotatoe for further help polish the more lacking parts of the wiki.

If you want to know things I've planned but still haven't seen the light of the day, head over to my Warehouse, and if you wish to see my take on a TF2 Freak ranking, here.

I should point out that I do drawing and sketch commissions. If you're interested you can contact me on here, Steam, deviantART, Instagram and Tumblr. Here are my prices and rules: [link]

My TF2sona, always a BLU Soldier, lacking the grenades and with an Air of Debonair-painted Sergeant's Drill Hat and constantly fluctating miscs. Usually any kind of glasses and an informal coat.

You may use it if you want to represent me in the remote case anyone's interested.

I can't remember what was the first Garry's Mod video I ever saw, but I know it was before I even knew about Team Fortress 2, but I loved them so much that I eventually bought a Team Fortress 2 + Garry's Mod bundle. The very first thing I did on Garry's Mod was doing Painis Cupcake's face on a Soldier ragdoll.

When I finally decided to start doing a video, it turned out to be quite time consuming, especially due to my prehistoric video-making software. My first video ever was about Painis Cupcake fighting Chirstian Brutal Sniper for no apparent reason. It was obviously very sloppy and of quite bad quality. I quitted doing it after getting annoyed so much by Windows Movie Maker.

However, it wasn't after seeing LEtheCreator's Freak Fight, Spyper vs. Christian Brutal Sniper when I started thinking of doing another video, but my Video-editing Software wouldn't let me enjoy making videos. I searched for another and found a somewhat pleasing one. I made my first Gmod video then, but obviously it wasn't known.

It wasn't until "A very strange response starring TF2 Monsters" when I started to get noticed. OluapPlayer, LEtheCreator and eventually Minifett became my friends, and I enjoyed the most of making Garry's Mod Videos.

Since then, I've made the Painis Cupcake's revenge series, for which I've started to get fairly known, reaching 2000 subscribers by the time I finished that series. I've then started the Wrath of Weaselpie tennis with Sonicrulez11, and made some videos with the new Source Filmmaker, but definitely stayed with Garry's Mod due to the former being glitchy and with high tendencies of crashing.

As of lately, I've contributed in the Doppelganger's Rampage series, and I've just started a personal Gmod series called 'Mecha Madness", about Pencer, Tella and their Robot Army that will try to take over the Freak World and bring rules to it.

I've been doing really slow as of late due to the increasing difficulty at University, taking away free time, as well as the fact of trying to draw comics and make a full game hack of Final Fantasy VI.

Retrieved from "https://tf2freakshow.fandom.com/wiki/User:Kugawattan?oldid=41753"
Community content is available under CC-BY-SA unless otherwise noted.