Stu's body is of a deformed RED Heavy, being slimmer than the average one, and always possesses bizarre expressions on his face (often his signature smile). He wears a pair of Summer Shades, and he is sometimes seen smoking a cigarette.

Pidface is completely random in both actions and words. Weird and unpredictable, his actions and words are typically nonsensical. Wherever he goes, he is accompanied by strange sound effects.

He appears to be a friend of Ninjineer's, as he is sometimes seen hanging out with him and assisting him. However, because he is completely insane and unpredictable, he's likely to do things that are destructive to him and his friends, often with a smile on his face.

Stu Pidface's abilities defy all logic and explanation. There seems to be no limit to what he is capable of doing. He can fly, teleport, fit inside tiny containers, summon objects from thin air (ranging from miscellaneous props, to people, to mountains of explosives), expand any part of his body, eat anything, make things spontaneously combust, turn people into inanimate objects, stick to any surface, lift and throw things many times his own size, defy gravity, turn into things, and much, MUCH more. He's even able to perform such feats in the Underworld, (Including Decapitating his own head and making it fly to surprise Nuclear Scout, and catching his Wrangler beam and throwing him.) where almost all other Freaks are devoid of their abilities while awaiting respawn.

However, because there's no way of knowing what goes on in his tiny head, it's extremely difficult (if not impossible) to tell how many of these feats he does on purpose or actually knows how to do on a whim. Also, his durability fluctuates from time to time. He might get caught in a nuclear explosion and walk away like nothing happened, but then get hit in the head with something seemingly harmless like a plush toy, and spontaneously die (more than likely announcing his death by saying "Dead" or something to that effect). It's hardly surprising to anyone when he gets himself killed twenty times a day just by doing idiotic things. 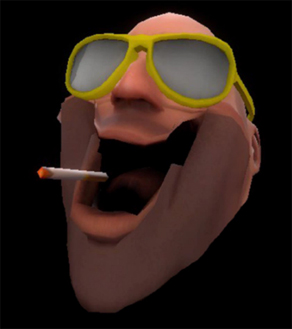 Retrieved from "https://tf2freakshow.fandom.com/wiki/Stu_Pidface?oldid=40567"
Community content is available under CC-BY-SA unless otherwise noted.