The Spycrab (alt. Spy Crab, Crab Spy) is a creature that resembles a Spy, but walks like a crab.

The meta origins of Spycrab began as an animation glitch where a Spy would hold the Disguise Kit, look up, and crouch, causing the Spy's arms and legs to deform, making him walk like a crab. The glitch got so popular that, starting with the Sniper Vs. Spy update, when taunting with the Disguise Kit, a Spy player has a 20% chance to activate a taunt based on the Spycrab.

Spycrabs appear as normal Spies, of any gender or team orientation, who usually move whilst crouching. Most of the time they hold their arms upwards, hands assuming a pincer-like pose. They usually carry a Disguise Kit in their right hand, occasionally clicking it open and shut as they walk, thought they are known to click their hands without them.

Both BLU and RED Spycrabs are peaceful creatures. They commonly migrate from point to point during the mating season. They are quite docile and harmless when unprovoked.

However, they are known to gather into sizeable groups at times when they are particularly endangered. Usually they merely chase off the aggressors, but in rare cases they resort to fight back.

Spycrabs are apparently amphibious creatures, and feel comfortable both on dry land and in bodies of water. While they most likely cannot swim, it is presumed they simply traverse the bottoms of lakes and seas, breathing underwater.

They can attack with their pincer-like hands, and are capable of utilising sappers like normal Spies. Overall, Spycrabs don't possess any special powers.

A BLU Spycrab at its nest.

RED Spycrabs migrating into a sunset. 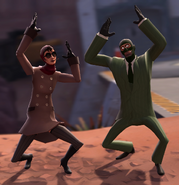 Retrieved from "https://tf2freakshow.fandom.com/wiki/Spycrab?oldid=42454"
Community content is available under CC-BY-SA unless otherwise noted.