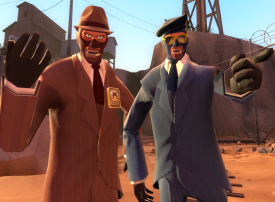 Spy and Spy is a duo of dim-witted Spies, one RED and the other BLU, created by YouTube user OluapPlayer.

RED appears as a RED Spy wearing a Fancy Fedora and a Gold Dueling Badge.

RED is a particularly idiotic individual who never makes any sense. He is fairly oblivious to the world around him, and only wants to have fun at other people's expense, showing he is insensitive and sometimes even sadistic. He is reckless and will pick fights with opponents far stronger than him, and is known to randomly hump nearby objects, or people, without warning.

RED has access to all weapons of the Spy loadout, though his favorite items are the Big Earner and the Dead Ringer. Despite possessing a Gold Dueling Badge, his skill with his equipment is dubious at best. He has also been shown some enhanced durability, having once shrugged off having his entire head exploded, though this is mostly due to his slapstick nature.

His most notable 'ability' is suffering from spontaneous combustion; at random, RED simply bursts into flames for no apparent reason. While these flames are inconvenient, RED has been numbed by them enough for him to be effectively immune to fire damage, though this never truly helps him.

Both Spies are pure comic relief and possess no true fighting skill to speak of.

BLU appears as a BLU Spy wearing a Frenchman's Beret and Summer Shades.

Noted for his cockiness, BLU believes himself to be far smarter than he actually is, though in truth he is dumber than the average person. He enjoys coming up with schemes which more often than not backfire on him and looks down on others, thinking them to be idiots. He also enjoys having fun at other people's expenses, showing a more insensitive side to him.

BLU has access to all weapons of the Spy loadout, though his favorite items are the Ambassador and the Dead Ringer. He shows surprisingly high competence with firearms and is able to nail headshots from great distances.

Beyond that, BLU sports no truly phenomenal abilities beyond obeying slapstick physics, meaning he often gets gravely injured, only to be completely fine as soon as he appears again.

Both Spies are pure comic relief and possess no true fighting skill to speak of.

By the creator of the Freaks

Retrieved from "https://tf2freakshow.fandom.com/wiki/Spy_and_Spy?oldid=41722"
Community content is available under CC-BY-SA unless otherwise noted.