Seeman appears as any other RED Demoman, but he has plenty of characteristics which differ significantly from the average Demoman. As his name implies, Seeman's favourite hobby of sorts is to pointing out something and saying "SEE?". He practically always says this while making a characteristic, distinctive face.

He appears to be almost always happy, constantly laughing, even in situations which can be pretty dangerous for him. While he isn't hostile, he reacts violently to treats of his opponents. He doesn't seem to be pretty determined when fighting, or even serious when challenging others to battle. However, he seems to enjoy a good fight. Despite this he doesn't seem to want to battle others for the sole purpose of killing them.

Seeman has also a pretty random personality. However, he seems to get along well with some people who can stand Seeman's habit of constantly saying "See?".

No one knows when or where Seeman came from, but it has been around as much as the other classic Freaks. Most of the population, including the Thieving BLU Soldiers, are fans of the character's quirks of exclaiming non-sequitur and making funny faces.

Seeman is known to travel all around the TF2 Freak World pointing out things to everyone around him. He's been challenging other Monsters due to their hostility, rising victorious against Painis Cupcake, the Bugler Vagineer, and Christian Brutal Sniper, but losing against Dic Soupcan.

One day Seeman was met again by Painis Cupcake but not even with the help of Seeldier did he survive the encounter, and the two went to the underworld, along other Monsters who died at the hands of the cannibal as well, where they spent some quality time with Professor Pyrowise until they respawned, in Painis' spawn room at 2Fort.

Everyone but Seeman started to fight until the Freak decided to join the fray encouraged by his Soldier friend. He promptly knocked out the weakened fighters and finished off Christian Brutal Sniper and Dic Soupcan. Happy with their destruction, Painis congratulated Seeman. Incapable of hating anyone, the See-Freak immediately befriended the cannibal.

Seeman, despite his behavior, is one of the strongest monsters in existence, and has emerged victorious even against powerful enemies, like the feared Painis Cupcake, Christian Brutal Sniper and even the Vagineer and Snyphurr duo at once. He was capable of such accomplishments because of many of his special abilities which let him stand out in most battles:

In addition, he's shown to be quite defensive and very difficult to harm. Getting punched with massive strength wont do any particular harm to Seeman, and he's been slashed and stabbed numerous times, and Seeman's only reaction was a laugh, indicating a massive tolerance to pain.

Seeman is one of the very few people to be immune, in a way, to Snyphurr's Stone Gaze. At first it would look like Seeman has just been petrified, but moments later a group of Demomen will appear out of nowhere. After yelling "TASTE THE RAINBOW, MOTHERFUCKER!" and firing a phenomenal multi-colored beam which burns the offender, Seeman is unpetrified.

Despite being a Top-rank TF2 Monster with an incredible high stamina, there are physical attacks capable of damaging or even killing him, such as when Painis Cupcake managed to eat him. He also does have some weaknesses that make him not as much as a potential threat as he could be: 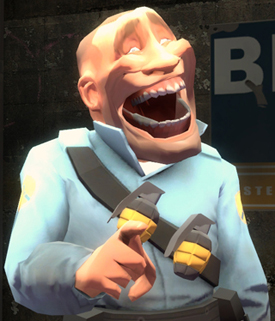 Seeldier is a BLU Soldier without the signature helmet whose head is much larger than the average Soldier.

He is Seeman's best friend and partner in seeing, sharing Seeman's unique characteristic of shouting "See!" in any given moment, while making a distinctive face. He is known for being Seeman's "angel guard". He usually appears in battles where Seeman is participating and potentially losing.

His main ability, after removing his helmet (if it's on) and saying "See!", is doing an awkward dance to the song Grinder from Red Alert 2: Command and Conquer. Once finished dancing, for an unknown period of time an invisible aura surrounds his skin, which upon contact it makes the object or person to explode violently without leaving anything left of it.

Seeldier doesn't exactly seem to be physically different from your average Soldier, and may be easily harmed like one, outside of his explosive attack.

Note: All of the following videos are re-uploads

Retrieved from "https://tf2freakshow.fandom.com/wiki/Seeman?oldid=41706"
Community content is available under CC-BY-SA unless otherwise noted.