Magic Mann usually disguised himself as a poor, homeless Scout using a Ghastly Gibus, Flip-Flops and a very dirty shirt, sometimes bloodied, who asked for either food or a cheap hat. When a benevolent bystander decided to help him, Magic Mann revealed himself with a loud "MAGIC MAAAAAANN" sound, and claimed he would reward the person who helped him for their generosity. However, Magic Mann would not reward the generous person at all, instead tricking and torturing them with his magic powers until near death, before escaping while laughing wildly. Magic Mann was chaotic and erratic, attacking anyone who fell to his traps, independent of their teams or alignments.

Magic Mann was always one of the most hated inhabitants of Oluapland, becoming infamous for his cruelty. He would torment innocents, particularly Gentlemanly Demo, and always escape retribution.

The magician eventually met his match with Doppelganger, who stumbled into the mad Freak and sought to steal his magical powers. Severely underestimating his foe, Magic Mann was defeated and Doppelganger would add his wild magic to his already growing power. As the Spy's other victims - Major Scout Guy, Medizard, Ninjineer, Soldine and Cyborneer - begun joining forces to get back at him, Magic Mann refused to cooperate and instead attacked Medizard unprovoked. Cyborneer came to his rescue and eventually decapitated Magic Mann with his wrench, putting an end to his menace.

Magic Mann, as his name implies, had a great arsenal of magic powers. He could launch bolts of energy from his hands which had several effects which defied regular laws of physics, such as exploding people, turning them inside out, causing explosions, or even turning his enemies into MeeMs. Magic Mann could also levitate, teleport and create objects out of thin air.

Despite his reality-warping magic, Magic Mann had an array of weaknesses which can be exploited by his opponents. 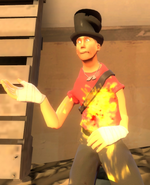 Note
These videos have been deleted.

Retrieved from "https://tf2freakshow.fandom.com/wiki/Magic_Mann?oldid=42138"
Community content is available under CC-BY-SA unless otherwise noted.