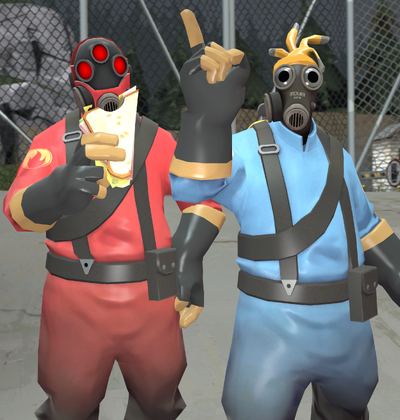 Bob and Bob are a pair of Pyro Freaks created by YouTube user Xho.

Bob wears a Triclops, both Roasting and Blazing. He lacks the napalm grenades on his bandolier.

This RED Bob is the supposedly intelligent one of the two Bob's - much more quick to recognize danger. That being said, Bob is not massively intelligent to begin with. Having experience with safeguarding others, Bob is far more combat-suited than the other.

Despite being of somewhat normal intelligence, Bob is often drawn into homicidal situations by the other Bob and often has to get out of the situation with at least his head intact.

Bob is well known for being a Sandvich-addict and an 'occasional' Scrumpy drinker (much to the chagrin of any Demoman present) and can go into an impressive Sandvich-withdrawal rage if one Sandvich is taken from his grasp.

As said, Bob can enter a Sandvich-withdrawal mode if a Sandvich is taken from his grasp. In effect, Bob's power increases tenfold at the cost of his sanity until a Sandvich is given to him.

Aside from that, Bob is (normally) not much stronger than the average Pyro. He has once kicked the other Bob some distance but with a comical effect. Like all Pyros, Bob is fireproof.

His greatest ability can be a weakness. At a cost of his sanity, Bob will fight anyone who gets in his way of a Sandvich, which may well be a high-rank Freak. He may also be easily outsmarted in this mode. However, the other Bob is immune to this Sandvich fueled rage.

Bob has other weaknesses as well. When not going insane, Bob is no stronger than the average Pyro and could be easily kicked about by anything with enhanced strength.

Bob wears a Respectless Rubber Glove, which is an apt description for his demeanor. He has been seen wearing either the Deus Specs or the Sight For Sore Eyes as well.

Bob is well known for being a master-constructor (greater so than the average Engineer) and can create nearly anything at nearly any desirable amount of power. Usually, Bob doesn't adhere to any natural limits.

Despite his greater-than-Engineer level intelligence, Bob does not exactly come across as smart - stupid at the very most. To be said, this Bob has a serious lack of common sense; much like a mad scientist when it comes down to terms of sanity.

Because of his lack of morality, Bob often goes on impulse and usually results in both Bobs in a near death situation. As such, Bob never plans on surviving as he never thinks that far ahead.

Bob is a master at constructing nearly anything that he and the other Bob needs. Practically, this can be done by banging his head against a wall, table or any hard surface to produce it through unknown means.

More clearly, Bob has an inhuman level of strength, endurance and stamina - although he rarely ever puts it to good use, aside from defeating a number of RED Nnnngh Snipers alongside Interesting Spy. Bob created Rex and constructed his somewhat overpowered Cow Mangler.

Bob is immune to the other Bob's Sandvich-level rage attacks, and is presumably fireproof as well.

Although Bob has enhanced endurance and stamina, Bob cannot sense (or will not sense) any signs of danger. So much so that he will go into any situation gas-mask first and attempt to live through it with the other Bob clinging on to him (or at least the gibs of his arms).

Although Bob has this enhanced physical power, enough strain on him can know him out (or in a more extreme case, kill him).

Retrieved from "https://tf2freakshow.fandom.com/wiki/Bob_and_Bob?oldid=42372"
Community content is available under CC-BY-SA unless otherwise noted.