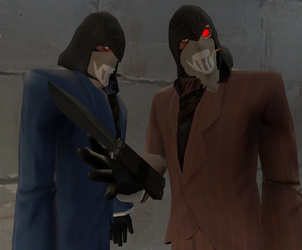 The Assassin Sect are a group of RED and BLU Spy Assassins created by Xho.

As they are the superiors, RED Assassins have a commanding authority over BLU Assassins. As such, they have a disciplined nature and a somewhat intimidating nature to those who get in the path of one. They are equipped with a Doublecross-Comm and a Dashin' Hashshashin.

Unlike the BLU Assassins, the RED Assassins have a more combat suited repertoire. Whilst like the BLU Assassins - able to teleport, move at incredible speeds and whatnot, RED Assassins are physically stronger and have more accurate abilities with the knife. They have a very similar combat skill to the Men of Mystery although far less contortion-oriented. Their physical strength is on par with freaks such as Interesting Spy. Their left eye is given a mask to see through walls and physical structures - including Freak bodies.

Although well equipped and have exemplary skill in combat, RED Assassins lack the illusionist skill of the BLU Assassins and therefore cannot escape in the same way the BLU Assassins could. Their physical endurance however is similar to that of a Heavy - whilst strong, cannot endure much.

The BLU Assassins is the second Assassin Group, called the 'common' Assassins as they are far more common to see than their RED superiors.

BLU Assassins do not have an intimidating presence as their RED superiors do. Although, they have a disciplined nature and a somewhat intimidating nature to those who get in the path of one. They are equipped with a Doublecross-Comm and a Dashin' Hashshashin.

BLU Assassins are far less likely to kill than the RED Assassins. Instead they are master illusionists; creating copies of themselves to an innumerable degree as well as teleporting and moving at blisteringly fast paces. Other illusionist techniques they possess also include rendering their enemies blind in order to kill or move past them, as well as surviving incredible falls. Their left eye is given a mask to see through walls and physical structures - including Freak bodies. They are also very good at disguise - unlike RED Assassins who cannot.

BLU Assassins, although able to slip past much better than the average Spy have only the skill to do so. Killing is rarely on their agenda and can only be done when necessary - which is a rarity. They also lack physical strength and endurance like the RED Assassins, which means that if caught, can be incapacitated very easily.

Retrieved from "https://tf2freakshow.fandom.com/wiki/Assassin_Sect?oldid=41979"
Community content is available under CC-BY-SA unless otherwise noted.